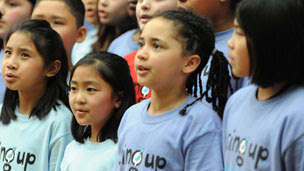 Singing in school can make children feel more positive about themselves and build a sense of community, research based on 10,000 children suggests.

An evaluation by the Institute of Education of England's national singing programme, Sing Up, found a clear link between singing and well-being.

It also found that children who took part in the programme had a strong sense of being part of a community.

But it is not clear that the scheme will be fully funded in future.

The Sing Up scheme supports schools to increase singing in choirs, lessons and individually, and provides a range of resources to help.

The Institute of Education's independent three-year study, commissioned by the Sing Up programme, is based on data collected from 9,979 children at 177 primary schools in England.

It said: "A clear inference may be drawn that children with experience of Sing Up are more likely to be advanced in their singing development and to have a positive self-concept," the study said.

It also found that Sing Up children were up to two years ahead in their singing development than those of the same age who did not take part in the programme.

Composer Howard Goodall, the National Singing Ambassador, said: "These findings are gold dust for head teachers. We've always maintained that singing, alongside its brain-training benefits, can help children to grow in confidence and create stronger communities and now we're able to prove it with hard evidence."

The research comes just days after ministers said they were safeguarding the funding of music in schools at the present level for one year ahead of a major funding shake. But there are no guarantees on music funding after 2012.

And some councils could see music budgets cut by up to 10% next year.

The £10m a year Sing Up scheme was only funded until the end of 2011, but ministers said on Monday they would provide some funding to enable it to continue.

A spokesman for the Department for Education said: "We know that schools and teachers value the resources provided by Sing Up, that is why the government will provide some funding for 2011-12 to enable a sustainable future for Sing Up to be developed."

However the Department for Education has not made clear how much it will provide.

The announcement on the future of the Sing Up programme was in response to the Henley Review of music which warned that music education in England's schools was still "patchy".

And it said there should be more opportunities for singing and playing musical instruments in schools, as well as efforts to bring professional musicians into the classroom.